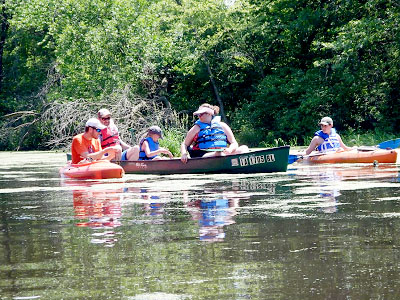 Scott Caven, our Aquatic Invasive Species Coordinator, explains how to distinguish between the highly-invasive Eurasian watermilfoil and the seven watermilfoils that are native to Wisconsin.

On June 11, 2016, River Alliance hosted the Water Hyacinth and Water Lettuce Monitoring Day on Lake Onalaska with a few goals in mind: to engage citizen scientists in AIS monitoring, to ensure water hyacinth and water lettuce were not growing in Lake Onalaska and to learn about and enhance Lake Onalaska, all while having some fun! Volunteers from the U.S. Fish and Wildlife Service, University of Wisconsin-La Crosse, River Alliance of Wisconsin, Lake Onalaska Protection and Rehabilitation District and Brice Prairie Conservation Association gathered at the Fred Funk boat landing in Brice Prairie, eager to do their part to stop aquatic hitchhikers. Before hitting the water, the group reviewed key identification characteristics for water hyacinth, water lettuce and other AIS. After launching their kayaks and canoes, it didn’t take long for the group to test out their “refreshed” AIS identification skills.

“There’s Eurasian watermilfoil! It has more than 10 pairs of leaflets!” exclaimed one participant. “This aquatic plant looks like a lasagna noodle with serrated edges. It’s gotta be curly-leaf pondweed!” proudly stated another. And they were right! During the four-hour paddle, the group properly identified Eurasian watermilfoil, curly-leaf pondweed, faucet snails, purple loosestrife and yellow iris – all of which were previously documented in Lake Onalaska. But it didn’t stop there. To this hearty group of river rats, monitoring and mapping AIS wasn’t enough; they wanted to take control, literally. So, all of the yellow iris (classified as a “restricted” invasive species under NR40, Wisconsin’s Invasive Species Rule) found during the paddle was removed, bagged up and tossed in the trash. 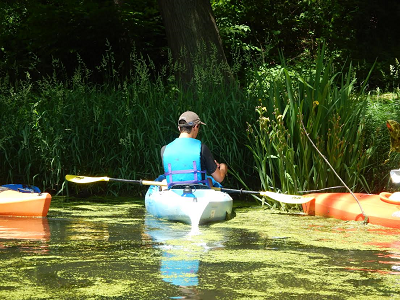 Fortunately, neither water hyacinth nor water lettuce was discovered during the paddle. But just to be on the safe side, River Alliance staff and partners will continue monitoring Lake Onalaska this summer and fall to ensure that neither species shows up again. For now, it sure looks like last fall’s eradication efforts were successful, thanks in large part to dedicated citizen scientists like those that joined us for Saturday’s paddle.

River Alliance reminds you to do your part to ensure you are part of the solution, not the problem! Before launching and leaving, Wisconsin law requires you to: