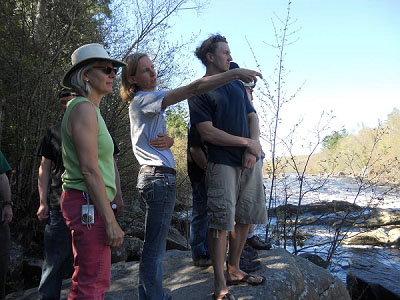 Angie Tornes (left, in the hat) of the National Park Service discusses routes through Grandfather Falls rapids (on the Wisconsin River) during a test run of recreational flow releases at the Grandfather Falls hydro dam.

One obscure element of river conservation work is the arduous and mostly thankless grind of getting hydroelectric dam owners to be kinder to the rivers they use. This grind usually takes place when a dam is up for re-licensing with the federal government. That is the time when river conservationists – citizens, public agencies, nonprofit groups – can insist that the dam owners carefully manage the public waters they use for their private gain.

“Manage the public waters” can take many forms: dam owners can be required to put in campgrounds and boat landings on the big water bodies their dams create. They can be required to change dam operations and equipment to reduce the chances that fish get chopped up in their turbines. And they can be asked to let out of the dam an extra gush of water a few times a year so that whitewater kayakers can experience, even if it’s fleeting, how a river used to flow before the dam was built.

Quietly but effectively negotiating those so-called “recreational releases” in Wisconsin is our good friend Angie Tornes of the National Park Service. Most recently, Angie helped negotiate releases at the Jim Falls dam, owned by Xcel Energy, on the Chippewa River, to enhance whitewater kayaking.

Starting this year, Xcel will increase the number of recreational releases from four annually to six and they will improve those spots on the river shore where boaters get in and out of the river (put-in and take-out). If you’re a whitewater kayaker and want to try out Jim Falls, click here!

These changes in Xcel’s license to have more recreational releases at the Jim Falls dam (located about 12 miles north of Chippewa Falls) has spurred the creation of a local whitewater paddling group (Pure Water Paddlers) and will bring some economic activity to the village of Jim Falls.

For her work on this and other hydro projects, we consider Angie Tornes a real river hero. It’s tedious and controversial work, and she’s suffered her share of personal and professional insults by dam operators. (We hold up Kaukauna Utilities for special opprobrium in this regard). But anyone who paddles a river or enjoys the river by a dam site in Wisconsin has Angie Tornes to thank for making the river more accessible.