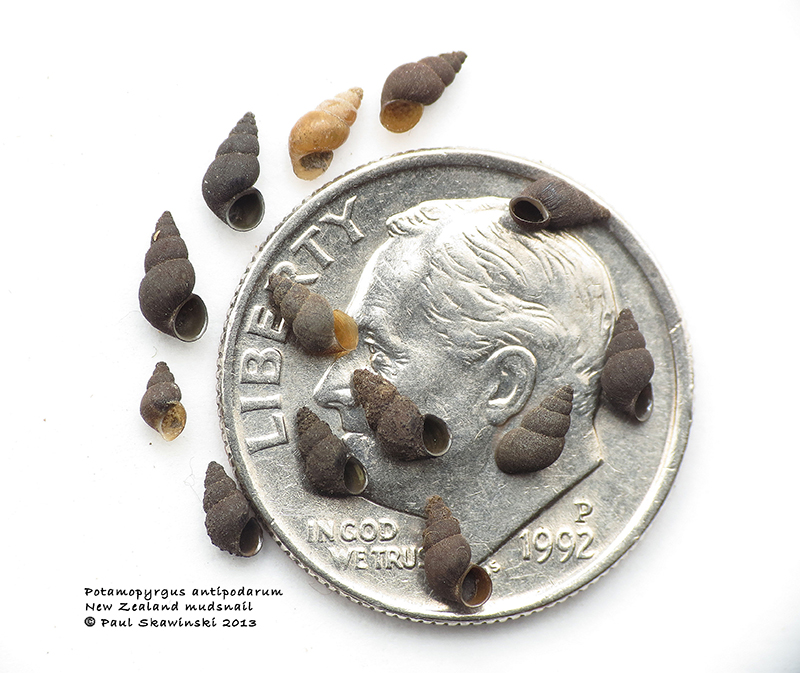 The invasive New Zealand mudsnail (Potamopyrgus antipodarum) has been recently discovered for the first time in Badger Mill Creek at the Highway 69 bridge crossing, near Verona, WI. The snail was initially identified by a Madison Metropolitan Sewerage District (MMSD) monitor during routine monitoring conducted on the creek, which begins in the Town of Middleton, and receives effluent from MMSD sewage outfall near Badger Prairie in Verona. It subsequently feeds into the Sugar River at Riverside Road, near the initial Highway 69 discovery. Regular monitoring helps MMSD gauge the effects of their discharge on the creek and any unexpected, harmful changes.

Upon the discovery of New Zealand mudsnail on Badger Mill Creek, samples were provided to the Wisconsin Department of Natural Resources and verified by a taxonomic expert. Prior to this discovery, Black Earth Creek in Western Dane County was the only inland stream in Wisconsin to have a known population of the invasive snail. Subsequent stream monitoring by DNR staff confirmed the presence of these snails at two additional sites on Badger Mill Creek.

The New Zealand mudsnail is highly invasive in Western states and is known to reach high abundances, outcompete native stream insects that serve as food for fish, and change nutrient dynamics in streams. Its impacts can vary and it is uncertain what impacts this invasive species will have on streams in Wisconsin. Bobbi Peckarsky of the University of Wisconsin, Departments of Zoology & Entomology has been analyzing data collected on Black Earth Creek since the initial discovery of New Zealand mudsnail there. “Data show populations of these snails are growing fast at three sites on Black Earth Creek, but more time and further study are needed to fully understand the impacts proliferation of this invasive snail will have on other aspects of these streams, such as stream metabolism, plant growth, macroinvertebrate and fish communities,” Peckarsky stated.

Stream anglers, volunteer and professional water quality monitors, and paddlers play an important role in preventing the spread of the New Zealand mudsnail. Here’s what you can do to help:

Volunteers will be needed over the coming months to build these stations and assist with further monitoring. Contact Amanda Perdzock at the River Alliance of Wisconsin, Upper Sugar Watershed Association or Southern Wisconsin Chapter of Trout Unlimited to become a part of these response efforts. 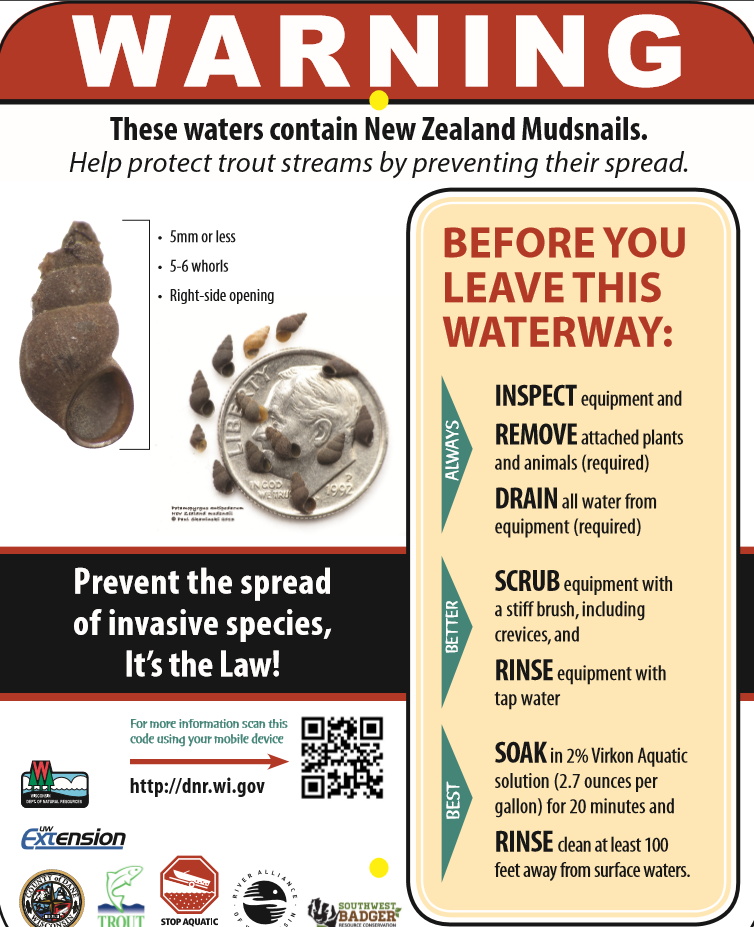