It has long been assumed that our groundwater supplies are inexhaustible, but in some parts of the state, water is being pumped out of the ground at a far greater rate than it can be replenished, and nearby rivers, lakes and wetlands are paying the price.

River Alliance’s first encounter with the issue of groundwater withdrawals was the big skirmish with the Nestle Co. and its Perrier bottled water brand, in 2000. They wanted to export hundreds of millions of gallons of water out of central Wisconsin in 1-liter bottles, sparking fear that such massive withdrawals would dry up surface waters.

Nestle eventually pulled out, and generic groundwater legislation was passed in 2004, with our backing. But irrigation for water-intensive potato, vegetable and corn production in the Central Sands region has intensified, stressing the surface waters in that area to the extent that the water’s edge on many lakes has declined up to 50 yards from historic levels. The Little Plover River has completely dried up at times, gaining it national recognition as a “Most Endangered River” in 2013 by American Rivers.

Another dry summer in 2011 provoked lakeshore property owners and water advocates in the Central Sands region to get organized. The River Alliance helped launch, and supports, the Central Sands Water Action Coalition, a consortium of over 60 organizations in the Central Sands advocating for wiser and more careful water use that allows the growers to keep growing but does not sacrifice surface waters.

This graphic shows the number of high-capacity (100,000 gallons-per-day or more) wells in the Central Sands region, where most of our groundwater work is focused.  (Courtesy University of Wisconin – Stevens Point Groundwater Center) 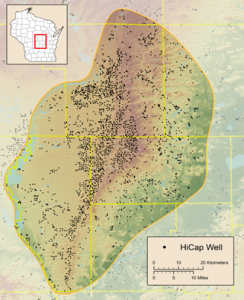 High Capacity Well Update A year ago Clean Wisconsin and the Pleasant Lake Management District challenged eight high capacity well approvals made by the Wisconsin Department of Natural Resources after the Attorney General opined that the DNR did not have to...
Read More

Give a few minutes of your time to make big difference in the fate of Wisconsin’s waters. UPDATE: The groundwater bill, SB 76/AB 105, has been scheduled for a public hearing on Wednesday, March 15 at 9:00 am in State Capitol Room 412 East. This is a...
Read More

Marty Wilke and her husband live on Spring Lake near Neshkoro, Wisconsin. They’ve had their place since 2012 but finally made the move full-time last year. As residents in the Central Sands region, they are all too aware of the depleting water levels of nearby...
Read More