Can Lessons Learned in Iowa be Applied in Wisconsin? 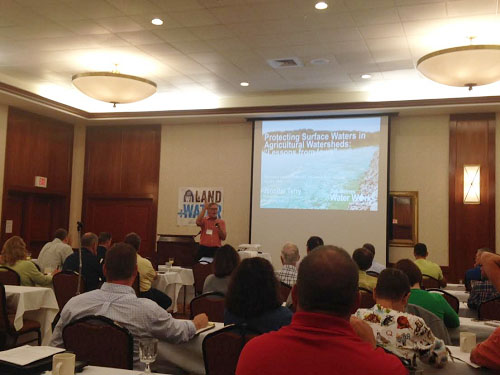 Wisconsin Land + Water Conservation Association generously provided a forum to the River Alliance at their annual county conservationists meeting on July 21 in Wisconsin Rapids to bring in two dynamic speakers from Iowa—Jennifer Terry from Des Moines Water Works (DMWW), and Craig Cox from the Environmental Working Group (EWG)—to talk about how they see the interface of agriculture and water in the state of Iowa. They raised some timely and challenging issues.

A packed house of county conservationists and municipal water works operators listened intently as Terry, Environmental Advocacy Leader for DMWW, described the ongoing lawsuit that DMWW has filed against three upstream counties over nitrate contamination in the Raccoon and Des Moines rivers, sources of Des Moines’ drinking water. (Des Moines is one of 11 Iowa utilities that utilizes surface water as a drinking water source.) DMWW contends that the heavily-farmed land in the watershed, 78% of which is artificially drained via underground piping or “tiling,” concentrates nitrate pollution and dumps it untreated into rivers, and should be regulated as a source of pollution. In Iowa, where agriculture is king and the laws governing drainage districts have been on the books since the late 1880s, this is a hard sell; DMWW hopes the federal court will be sympathetic to their cause.

After Des Moines taxpayers funded a nitrate removal system in 1992, they now face an estimated $80 million expense to upgrade the system’s ability to remove the excess nitrate in water from the Raccoon and Des Moines rivers. Though few Wisconsin water utilities get drinking water from surface waters (most use groundwater), many are paying attention to this lawsuit, scheduled to be heard in June of 2017, with great interest. You can be sure many in the agricultural state of Iowa are watching it like a hawk.

Craig Cox, EWG’s Senior Vice President for Agriculture and Natural Resources, has been researching and analyzing the complicated relationship between agriculture and water for decades. He’s convinced that the way we’ve designed and implemented agricultural conservation programs over the last couple decades is broken and desperately needs to be fixed. Cox has the unique expertise, backed by research, to stand on firm ground as he makes such “edgy” claims (in Wisconsin, anyway) as “we can’t keep paying farmers for conservation,” because it doesn’t work. (This is well documented in two of EWG’s outstanding reports, “Fooling Ourselves,” and “Losing Ground”). Cox suggests we’ve crossed a critical threshold where everyday people are being affected by water quality impairments, whether it’s water bills going up due to nutrient removal costs, a hunting dog getting sick from algae exposure, or any number of other impacts.

Cox also called for establishing a “basic standard of care” with respect to agriculture, built on the following principles: 1) We don’t want every farmer to have an EPA or state permit, 2) We do want to restrict activities that are disproportionately damaging—and for which conventional conservation programs can solve the problem, 3) We should restrict practices that many, if not most, farmers could agree are just bad business and bad for agriculture’s brand, and 4) This should be a foundation on which voluntary programs and market-based approaches can rest.

Cox warned that the one lesson for Wisconsinites to learn about agriculture from Iowa was not to slip-slide to be like Iowa. We may not be Iowa, but Cox’s basis standards of care are sensible for this state too.